A New Chapter of COVID-19

This past December, in honor of TLLF’s 40th Anniversary, we talked with our Board of Directors about some of the Foundation’s legacy investments. We’re sharing our full conversation with Senior Advisor and Board Member Michael Tarwater here:

TLLF: How has TLLF’s support of LCH and LCI impacted the community, and why do you think those investment opportunities resonated with Mr. Levine?

MT: The investments in the Levine Children’s Hospital and Levine Cancer Institute helped each organization establish world-class care in those categories for a city that was becoming more and more a world-class city. I think the two are importantly linked. Because, if a city is considered “world-class,” but you don’t see significant investments happening – whether in healthcare, the arts, human services – then the claim to be world-class is hollow.

My perspective might be a little bit different because I was on the outside. I was part of the organization trying to raise funds from TLLF to help with LCH and LCI. What I told Mr. Levine is that I was asking him to invest in something that could be the difference between good and great. I think that was and is still true. We had good children’s services and good cancer services. But we now have top-flight services in both of those arenas. There are very, very few reasons why anyone would have to travel for treatment. TLLF played a huge role in that.

Now, I see it all from the other side as a board member at the Foundation. Those visible things that TLLF does in the community, which people can see as they drive around and interact with the city, are really just the tip of the iceberg when you look at everything this Foundation is supporting. In some respects, the depth and breadth of the support that goes out from this Foundation is a well-kept secret. It’s honestly kind of breathtaking.

TLLF: Is there an anecdote that you heard from an LCH or LCI patient that stays with you to this day?

MT: As the leader of Carolinas Healthcare System (now Atrium Health), I would often meet a family or run into someone who would rave about the care they received. They were extremely thankful they could receive care right where they lived. Obviously, LCH and LCI draw from around the region, but most treatments required for modern children’s care and cancer care can now be done right here in Charlotte. That wasn’t always the case. Mr. Levine didn’t make these investments to get accolades – they were made because he believed they were essential projects that would provide access for the community.

The response from scores and scores of people who have met the Levines in the ensuing years is just a sampling of the gratitude. This all stems from the care, concern, and healing that individuals and families receive as a result of those two institutions coming into being. 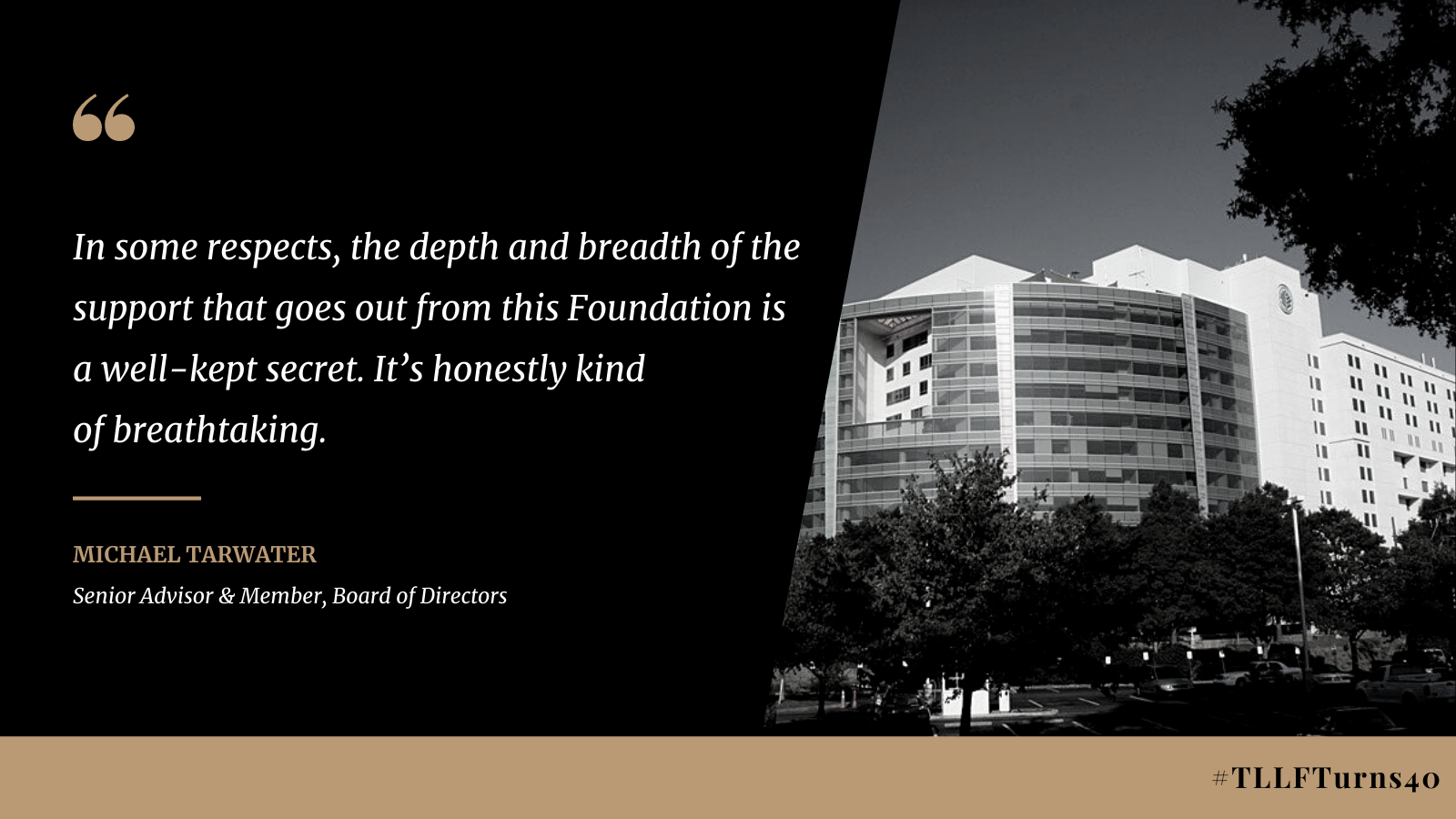 TLLF: When you consider all that has happened in the first 40 years, what excites you or makes you hopeful for the years to come?

MT: I think the Foundation is positioned very well to be able to keep doing what it’s doing: to make a difference in the community. Whether it’s through capital grants for healthcare, the work we do to help with homelessness and food insecurity, or through the things we do to bolster education access for early learners. We’re in a great position to try to move the needle and improve all of those areas in our community.

Mr. Levine has set up a methodology. He is a very wise investor and has been his whole life. These grants made by the Foundation are no different. They’re investments. They’re well-researched. There is significant due diligence behind them. And these investments pay dividends to the community. It’s a process Mr. Levine has set up and perfected over time that will serve the Foundation and the community well in the future.

To catch up on our Q&A with the Board, read our recent blog post.